We have suspected for some time that the Domino army had enlisted help from outside their trusted ranks in a bid to fast track their global domination. Last week, Brother Driblystick bravely infiltrated the cheese wall and took some shocking pictures. 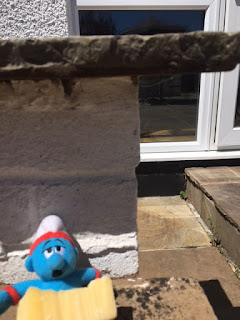 It pains me to say it, but the Smurfs have been hired as mercenaries. Our information is that they are being utilised as cheese minors. Their size and proportional strength makes them ideally suited to this job, freeing up the Domino troops for other work and increasing the flow of cheese.

Brother Binky has uncovered a long forgotten book about the ancient cheese mines, and it makes for a worrisome read. We believe that Domino's don't fully understand the consequences of what they are doing. I am reluctant to put forth any theory's until Brother Binky has had a chance to further investigate this dusty, and weighty tome.

Until we can bring you any new information, stay strong, and fight the cheese.

Posted by Deformed Monks of Cumberton at 06:07