Bob Dylan once asked...."How many roads must a man walk down, before you can call him a man?"

Answer -
I was once lucky enough to visit Mr Dylan whilst travelling the spirit world. It turns out that it was a trick question all along. The man he was thinking of was actually bound to a wheelchair, and more than that, he lived in the Antarctic where there are no roads. He was occasionally helped in to a snowmobile, but even then he would simply be driven over the endless snow planes. 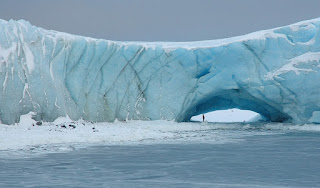 Once, the driver of the snowmobile suffered terrible cramp, and drove the vehicle right off the edge of a cliff. Both men crashed in to the icy sea where if not for substantial puffer jackets they would have sunk, becoming big manly ice cubes. Their absence was quickly noted and Captain America, who happened to be in the area on training duties, hurried to their aid. Whilst recuperating beside an oil filled radiator, the man sang to his friends in Russian, though he was not Russian, his friends weren't impressed and left hurriedly.
Much of this story was omitted from the final cut of Mr Dylan's song. Whether this is for the best, you can decide.

Brother Driblystick.
Posted by Deformed Monks of Cumberton at 07:36